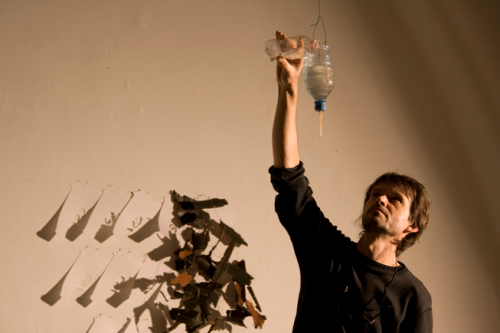 Music as an everyday performance

In 1958, Pierre Berthet, lives in Liège. He studied percussion at the Brussels Conservatory with André Van Belle and Georges-Elie Octors in the 80s. At the same time, for two years, he spent a lot of time in a bell tower playing the carillon and listening to the sounds of the environment. It was by listening to various types of music and by attending improvisation classes at the Liège Conservatory with Garrett List, composition classes with Frederic Rzewski and classes with Henri Pousseur that P. Berthet rediscovered the natural slope on which he had been sliding since he was very young: hitting, rubbing, shaking or throwing motley objects to hear the sounds that could escape from them. Moreover, he has always been prodigiously interested in falling drops of water on various materials. Then he gradually turned to extending objects or instruments with steel wires of varying lengths, which ended up in cans. He also learned a lot by playing regularly for about ten years in Arnold Dreyblatt’s band: “The orchestra of excited strings”. As well as in a duet with Frédéric Le Junter. Since 1990, he has been designing, producing and exhibiting sound and visual installations. Inspired and adapted by the places where they are exhibited, they also compose the materials he plays in concert. Since 2010, he interprets on request with great pleasure a composition by Tom Johnson for 5 sound clocks: “Galileo”. More recently, he has started to shake dry plants by motorising them.