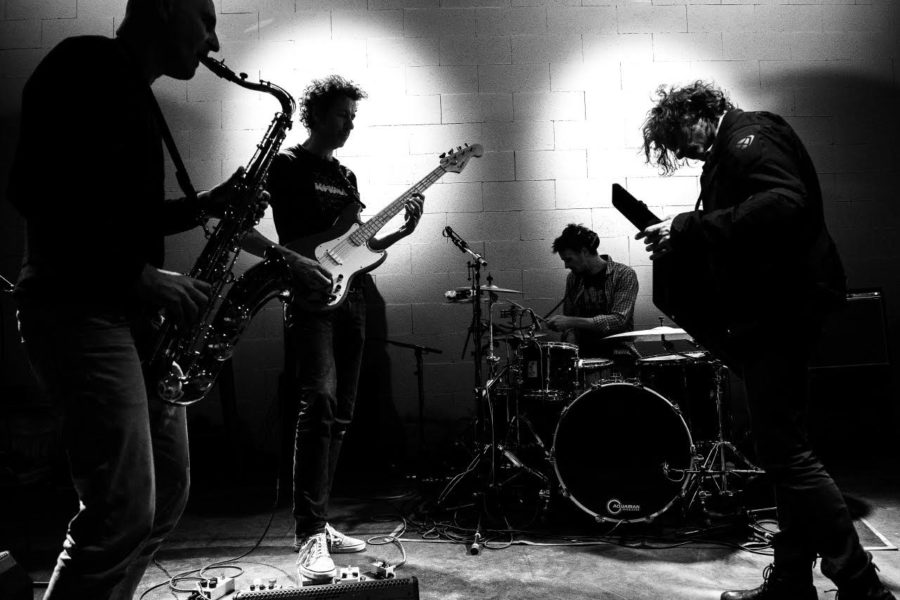 Ukandanz is originally the garage project of four French jazzmen, recognized in their
respective formations and collaborations (Paolo Fresu, Louis Sclavis, Didier Lockwood, Chris
Speed, The Amsterdam Klezmer band, Cosmic Connexion, John Greaves …), and sharing a
same thirst for discoveries and experimentation. Over the course of rehearsals and concerts, under the impetus of Damien Cluzel (Guitar – Jump to Addis / Ethiopiques n°15), the ethiopic influence naturally imposed itself in their music. The quartet will freely explore Ethiopian rhythms and sounds, composing a singular repertoire with a totally unbridled rock energy.

For several years guitarist Damien Cluzel had wanted to re-explore an
instrumental version of the Ukandanz project. Indeed, before the arrival in 2010 of the
charismatic singer Asnake Gebreyes, the band performed as a quartet. The closure of the borders caused by the covid offered him the opportunity to work on a new repertoire. At the end of 2020 he composed “Four
against the odds” a suite that navigates between the polyrhythmic games he is particularly fond of, the harmonies and melodies borrowed from Ethiopian music and the unbridled energy of a rock without concessions.

For this new formula he recalled pianist/keyboardist Fred Escoffier
present in the first iteration of Ukandanz. The virtuosity and versatility of this musician
make him one of the pillars of this new creation, as much at ease in a very rigorous rhythmic writing
as in the most unbridled improvisations.

Damien Cluzel’s lifelong companion, Lionel Martin is again present on this
new creation. The sound and energy of this saxophonist are unique and give the
quartet its singular sound patte.

Drummer Thomas Pierre is the newest addition to the Ukandanz universe. He has recently been heard in the band Kunta. The rhythmic base of this young musician and the wide sound he develops particularly serve Damien Cluzel’s writing.

As for the latter, he swapped the electric guitar, which was very present in the band’s previous
records, for the electric bass. It’s a notable change in sound that offers new writing possibilities.
<!– /wp:paragraph — Translated with www.DeepL.com/Translator (free version)