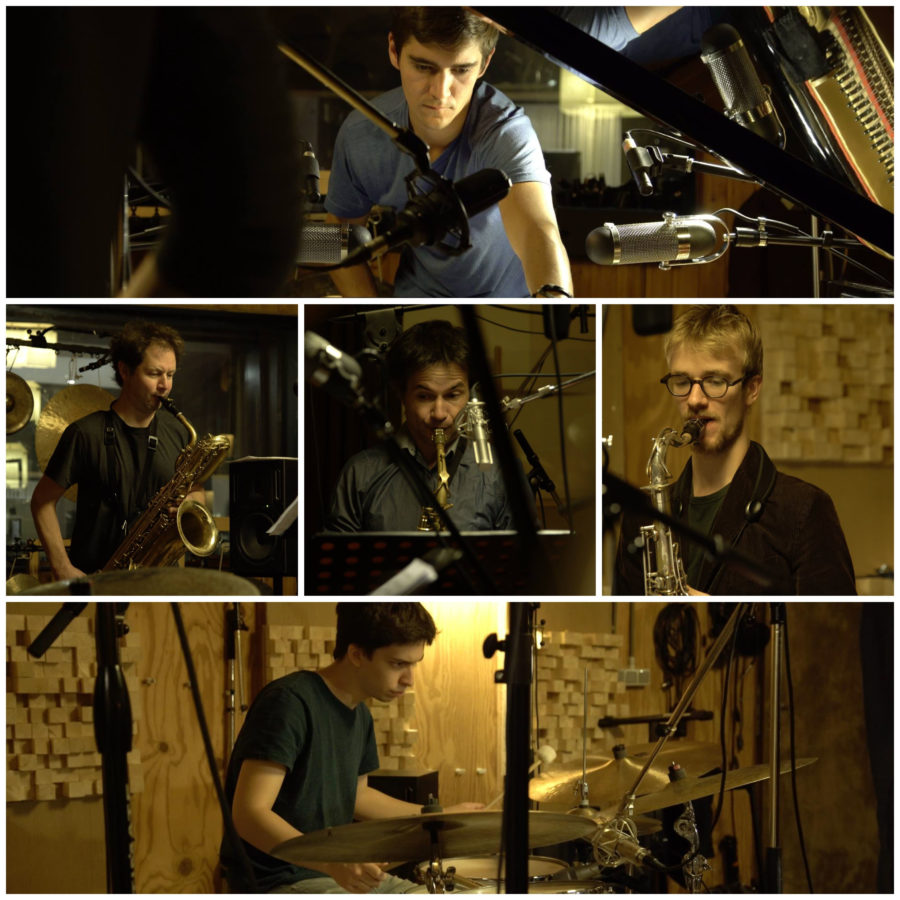 Currently, the music of Belgian trio Pentadox could be approached like a field of forces where intuitions, compositions and sensations simultaneously point towards different directions and attract each other. The band members navigate in a playful way between these potentials, fragments, little games, experiencing what happens before reality crystallizes into an unified picture or a meaning.

In this micro-world, time can be bended and mathematics behave strangely: the more the protagonists are given elements of structure, the freer they are. More composition = more improvisation. With Pentadox, Samuel Ber has created a unique vehicle that gives free rein to his creativity. The core of the band – Samuel Ber (drums), Sylvain Debaisieux (sax) and Bram De Looze (piano) – has been focusing on long-term exploration of new concepts and ideas about composition, improvisation and interaction and navigation for some year now.

Since its birth in 2015 during a residency in Brussels’ Jazz Station, Pentadox has been mixing elements of jazz, classical, avant-garde, improvised, electronic and contemporary music and has been regularly creating alternative ensembles by inviting other artists, engendering adventurous collaborations which each time reshape the musical vision of these artists.

For their first album “Between”, the group is joined by saxophonists Bo Van der Werf and Guillaume Orti (FR). The album was released at the end of 2018 in BOZAR. One year later, Pentadox transforms into an electro-acoustic sextet called “Fragments of Expansion” with the addition of 3 new adventurous minds who are all composers, improvisers and performers: Lester St Louis on cello, Nick Dunston on double bass and Weston Olencki on trombone and electronics. The eponymous album was released on WERF label in january 2020, during a tour in Belgium and Netherlands (JazzLab series). Today, Pentadox continues its investigations, both focusing on the trio and inviting interdisciplinary artists such as flutist and composer Sylvaine Hélary, filmmaker Jeanne Cousseau, actor Yoann Blanc, light artist Sam Mary, and bassists Felix Henkelhausen & Soet Kempeneer. It shouldn’t be a surprise, then, that Pentadox has proven successful and their talent has been recognized in competitions and via awards. After a residency in Jazz Station (Brussels) in 2015, the group was selected as the Belgian finalist of the B-Jazz International Contest 2016. Since then, they’ve played, amongst others, at BOZAR, Leuven Jazz Festival, Klara in deSingel, and Mithra Jazz à Liège. Their continued efforts were also rewarded in July 2018 by receiving the award for Young Jazz Talent Ghent at the Ghent Jazz Festival. The talent of each individual musician has also been recognized multiple times, for example, with pianist Bram De Looze winning a Klara Radio Award for most promising musician in 2018. In 2020 they are in the finals of the Avignon jazz festival.