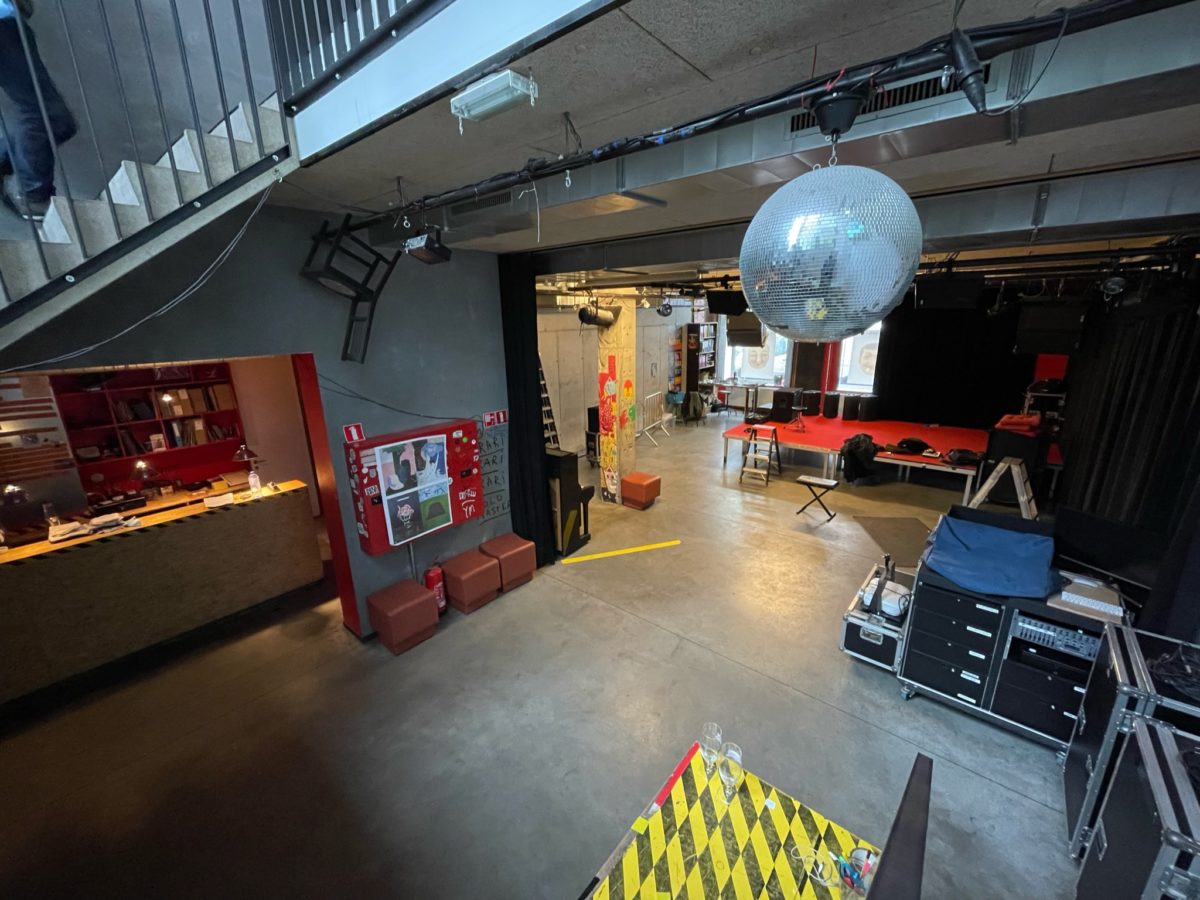 The organizations gathered under the Offbeat banner share the objective of bringing to light venues dedicated to creative music in Europe. They thus testify to the vitality of these artistic spaces that go against the grain of the music industry. First stop on a tour that will take in several cities of the old continent: Brussels.

It is at the very heart of Europe, in this international, multicultural and lively city, that we met the Ateliers Claus.

Located since 2006 in a superb family building (that of the Claus family), in a residential area of the town of Saint-Gilles, the venue has become a reference in Europe in the field of improvised and creative music. It welcomes Belgian and international artists, as long as they are fascinating, experimental, innovative, in a word: unique. Many musicians from all over the world, from Frenchman Pierre Bastien to American Thurston Moore, Portuguese Joao Lobo to Polish Piotr Kubek… have performed at the Ateliers Claus.

An international identity that is reflected in the programme but also in the team, which consists of 3 permanent employees and two part-time employees, including people from Belgium, France, Germany and Lithuania.

” We welcome 50 % Belgian artists and 50 % foreign ones ” tells us Tommy De Nys, who manages the place. That evening, English band Still House Plants and French artist Roxane Metayer, who is based in Brussels, make the rough concrete walls tremble to the sound of experimental and chaotic punk rock for the former, synthetic and minimalistic sounds for the latter. An aesthetic balancing act which is typical of the Brussels venue, to the delight of the 180 listeners present that night. A rather young crowd that can be heard chatting in both French and Flemish around the bar, which is well stocked with a selection of local beers.

The audience is made up of a few onlookers and many regulars. Every year, the Ateliers Claus organise close to 60 concerts in their own hall as well as one concert per month in other venues such as cinemas, abbeys etc.

To this already substantial activity of diffusion must be added numerous artistic residencies. Each year, a dozen artists or bands can come to enjoy the space offered by the structure to create. Some give a concert afterwards, such as Italian Silvia Tarozzi or Caroline Profanter, who will perform there in March. Others record an album.

Recorded music is indeed the third mission of the Ateliers Claus, with the independent label Les Albums Claus, which produces live and studio albums at a random pace, which has nonetheless sped up in the last years, culminating with 17 releases in 2021. In this beginning of 2022, the label launched the wonderful folk album Ma Délire, by Canadian musician Myriam Gendron. A complimentary activity that helps diversify the source of income for the Ateliers Claus, in addition to subsidies and the sale of concert tickets and drinks.

” The subsidies pay for the operation: salaries and fixed costs. The concert activity and the label are 100% self-financed. ”

The venue was completely autonomous and operated almost clandestinely in the early days, but for the past ten years, the place has been recognised by the public authorities and receives subsidies from the city and the Flemish government.

A final, more recent activity, has been added to the numerous missions assigned to the Brussels venue: the Claus bookings. Martin Vernier is a French booker who has been living in Brussels for many years and who is a real expert of the ” free and experimental ” music scene. He is in charge of circulating some twenty Belgian and international projects throughout the whole of Europe, in partnership with other concert producers.

“I have been coming to Les Ateliers for many years, even before thinking I would work there one day“, confides Martin. Over time, the venue has indeed become an essential part of the cultural life of Brussels and the neighbourhood, and more generally, of the “alternative“, “experimental” or “adventurous” music scene, whatever you might want to call it. ” It is a place where people come with their eyes closed, blindly trusting the programme “, tells us a music enthusiast we met that night.

Around the counter, after the amazing concerts by Still House Plants and Roxane Metayer, glasses are emptied and the turntables are playing garage, electronic and other musical wonders from around the world, for an audience that has decided to not go to bed just yet…

Offbeat is a Music Moves Europe project co-funded by the EU and initiated by Periscope in partnership with Petit Faucheux (France) and BMC – Budapest Music Center (Hungary) in 2021.

Based on a European collaboration and a partnership with different networks, we intend to discover, meet, connect with creative spaces in order to federate clubs and hybrid cultural places. The aim is to highlight the role and impact of places that are at the heart of artistic scenes, which implement technical, human and artistic resources to enable them to develop from local to European scale.

CARBON STUDY: WHAT IS THE IMPACT ON JAZZ VENUES AND FESTIVALS? | An AJC – Périscope study in the framework of Footprints