Culture as a driving force for environmental action.

For more than a decade, Julie’s Bicycle’s British are striving to encourage the music world to adopt greener attitudes. A member of this non-profit association since 2012, Chiara Badiali reminds us in this text that the cultural community must not only be the spokesperson for the ecological emergency: it must act. Here are seven climate workshops in which anyone can participate, individually or institutionally. Tropics of resistance” in constant evolution, to use Brian Eno’s expression.

When the UN Intergovernmental Panel on Climate Change (IPCC) published its 2018 report on what it would take to limit global warming to less than 1.5°C and the scale of the consequences if we fail to do so, it rang out like maybe no scientific report has before. From its reverberations rose the Fridays for Future school strikes, Extinction Rebellion, and a new public recognition of the urgency for climate action.

The reality is that for the past several decades, our response to the (unchanging) facts of the unfolding climate crisis has not been what it needs to be.

While consequences have been felt by countless communities at the frontlines of changing climate patterns – in droughts and floods and storms and land slowly being claimed by an expanding sea – many of us in the global North have been relatively insulated by geography and wealth.

But here, too, the consequences of environmental degradation and catastrophe are borne disproportionately by those already carrying other inequalities. Ten years after Katrina took the lives of 1,800; thousands more remained ‘internally displaced’: never able to return home after evacuating the Gulf Coast as the storm destroyed public housing that was not rebuilt, and the cost of housing rose to unaffordable levels in its wake. COVID-19, too, is highlighting these existing inequalities, as people of colour in the USA are more likely to die from the virus in part because of structural racism that has placed polluting industries (like coal power plants) next to their homes, slowly weakening lungs through decades of exposure to air pollution.

This is an extraordinary moment – a break from many of our normalities. It’s exposing fragilities and brittleness in many systems we take for granted, insisting we ask questions about who, exactly, the economy is serving and to what ends, and bringing into focus things we usually don’t even notice – like how much public space and air we sacrifice to traffic in our cities. As we rebuild and re-weave the fabric of our communities, businesses, politics, and economics, the ways in which we do so will lock in some important choices. We can look inwards, hang on to returning to ‘normality’, take fewer risks (creative and otherwise) in a world of smaller cultural budgets and let those saying ‘now is not the time’ ring out the loudest. Or we can look forwards and outwards, putting the environment at the heart of our recovery.

Jazz has a rich and vibrant history of getting the truth out loud and clear as a core voice in the civil rights movement – from Max Roach’s musical activism to Duke Ellington’s contractual refusal to play before segregated audiences. The climate and ecological crisis calls for a similar response, underpinned by a continued commitment to climate and environmental justice.

Julie’s Bicycle is a charity that was founded from within the UK music industry 12 years ago to empower the creative community to reduce its greenhouse gas emissions and take a leading role in responding to climate change and the environment.

In that time, we’ve worked to bring together thousands of creative individuals and organisations, providing research and guidance on environmental action that is based in science and made by the creative community, for the creative community. We also take this rich experience gained working on the ground to cultural and environmental funders and policymakers, advocating for all the ways in which the arts, artists and creative businesses are a chronically under-recognised and absolutely essential part of the needed transformations.

The creative community is not just a megaphone – nor is it just its carbon footprint. Its responses to climate and environment are as varied and vibrant as the community itself – and everyone, no matter whether an individual artist or a large institution, has a role they can play.

At Julie’s Bicycle, we’ve come up with seven creative climate trends as a way to better express this vibrancy :

Creative work exploring the environment and climate change from all angles: from ANOHNI’s song 4 DEGREES to Jason de Caires Taylor’s artificial reef underwater sculptures, from Jayda G sampling sounds from the orcas she studies to the Royal Court Theatre’s 2071 – a theatre piece like a lecture on climate change.

Organisations and businesses building a new creative ecosystem that aligns the way they work and the way they are governed to the climate crisis; modelling the low-carbon society we have to build through audience campaigns, low carbon technologies, green procurement policies, artists commissions and more. From solar-powered venues like the Klaverfabrikken in Hillerød, to the UK’s Shambala Festival becoming meat- and fish-free in 2016 to start a conversation about the environmental impact of our food systems and Abbey Road Studios switching to a renewable electricity supplier.

Applying our creativity to shaping new material, social, cultural, and economic solutions to our environmental challenges, like designers working on the circular economy, artists doing new community-led work, festivals as mini-civilisations and laboratories for technological innovation, and cultural pioneers piloting values-led business models. From NotWeed Paper made from invasive Japanese knotweed by Ljubljana-based designers Trajna, to DGTL Festival in Amsterdam trialling the Semilla Sanitation Hub that purifies urine back into drinking water and nutrients (possible future applications in areas where there is no existing sanitation); from Prada signing a loan agreement whose repayment terms are dependant on whether the company achieves previously agreed sustainability indicators, to May Project Gardens – a community garden in South London working with young people from disadvantaged backgrounds to bring together access to green space, empowerment through food growing, leadership training, and music through its Hip Hop Gardens programme.

Policy that creates the frameworks, investment, accountability, authority and pathways to drive progress and track change – this might be at national, regional, or city level; the frameworks used by funders and foundations; or internally at organisations. In 2012, Arts Council England – the national arts funding body in the UK – introduced a pioneering world-first programme requiring the 800 organisations receiving regular funding over multiple years (‘National Portfolio Organsiations’) to report data on their environmental impacts, and put into place an environmental policy and action plan. Julie’s Bicycle is the delivery partner for this programme, including through training events and webinars, guides on specific environmental issues, and the CG Tools carbon calculators through which organisations report. The programme has been transformational: energy consumption reduced by 23% between 2012/13 – 2017/18 (equating to £16.5 million in energy spend), and growing environmental literacy is also helping to power creative expression, with half of organisations developing new creative or artistic opportunities as a result of environmental initiatives, and half of organisations producing, programming, or curating work on environmental themes.

Creative people and organisations coming together among themselves and with schools, Universities, policymakers, charities, volunteer groups, technology developers, and more to scale action, accelerate learning, and build new communities of practice. From the Manchester Arts Sustainability Team – a network of cultural organisations working together to support the City of Manchester’s zero carbon by 2038 target – to the Europe Jazz Network’sTake the Green Train, bringing together the EJN network around a shared Green Manifesto, opportunities to exchange knowledge and experiences on greener practice, and an action research train tour project with Evan Parker.

Creative people and organisations coming together among themselves and with schools, Universities, policymakers, charities, volunteer groups, technology developers, and more to scale action, accelerate learning, and build new communities of practice. From the Manchester Arts Sustainability Team – a network of cultural organisations working together to support the City of Manchester’s zero carbon by 2038 target – to the Europe Jazz Network’sTake the Green Train, bringing together the EJN network around a shared Green Manifesto, opportunities to exchange knowledge and experiences on greener practice, and an action research train tour project with Evan Parker.

The seven creative climate trends are an invitation : they’re not fixed or permanent, instead coming together as a varied movement – a “tropics of resistance” as Brian Eno described it at the Julie’s Bicycle We Make Tomorrow conference in February 2020.

To take action – through environmental policies, artist statements, publicly making and sharing pledges to environmental action that invite partners, audiences, artists, venues, promoters to take part. The Europe Jazz Network Green Manifesto is one starting point, but anyone can write their own.

The environmental impact of your activities – whether venue or touring musician – and understand how you can make a difference through your own actions, and by using your voice to speak out. The IPCC tells us we have to reduce emissions by nearly half by 2030: a monumental task that is going to need systemic shifts at government policy level, and shifts in the way we all work and live – with a focus on transitioning away from fossil fuels.

The Julie’s Bicycle CG Tools are a free carbon calculator venues, touring artists, festivals, and office-based organisations can use to track their carbon footprint year by year and tour by tour.

Everything we try builds our understanding of what is possible and what can shift next. For example, one of the learnings from the Take the Green Train tour was that travel by train sets different travel constraints in relation to routing – but it also opened up new connections and relationships between promoters and venues who hadn’t previously worked together. There is an opportunity to develop new touring routes along European railways, and better relationships between promoters/venues to cooperate on bookings (in ways that were more common in the days before cheap air travel enabled illogical back-and-forth routes).

The tour itself sparked a lot of reflection among the participants and organisers: on what it means to be ‘green’; on art’s relationship to broader civic challenges; on the politics of music and the philosophical relationship between improvised music, pushing the boundaries, and working in new ways; on the transience of a live experience and our own transience and how we can feel and frame something that takes place at the scale of atmospheric climate change… It is important to recognise the value of these reflections triggered by a straightforward call to action, and the potential spirals of further action they can create if we push them forward.

Reduce your own environmental impacts, and speak out to support broader political and policy shifts that are needed. Include climate change as part of every decision you make: what you invest in, what (and who) you support, how you spend your time and resources, what you do (and what you don’t do).

We won’t always know exactly what the right thing is to do, and we won’t get everything right: we’re rebuilding a whole creative economy (or ecology). But with everything that is at stake, the alternative – of continuing with business-as-usual – seems increasingly detached from the world we live in.

So today I encourage you to think in terms of big shifts. What would a jazz community look like that has really put environmental stewardship and climate justice at its heart? What would it feel like? What can you do to help build it? 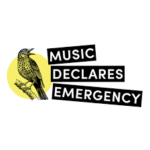