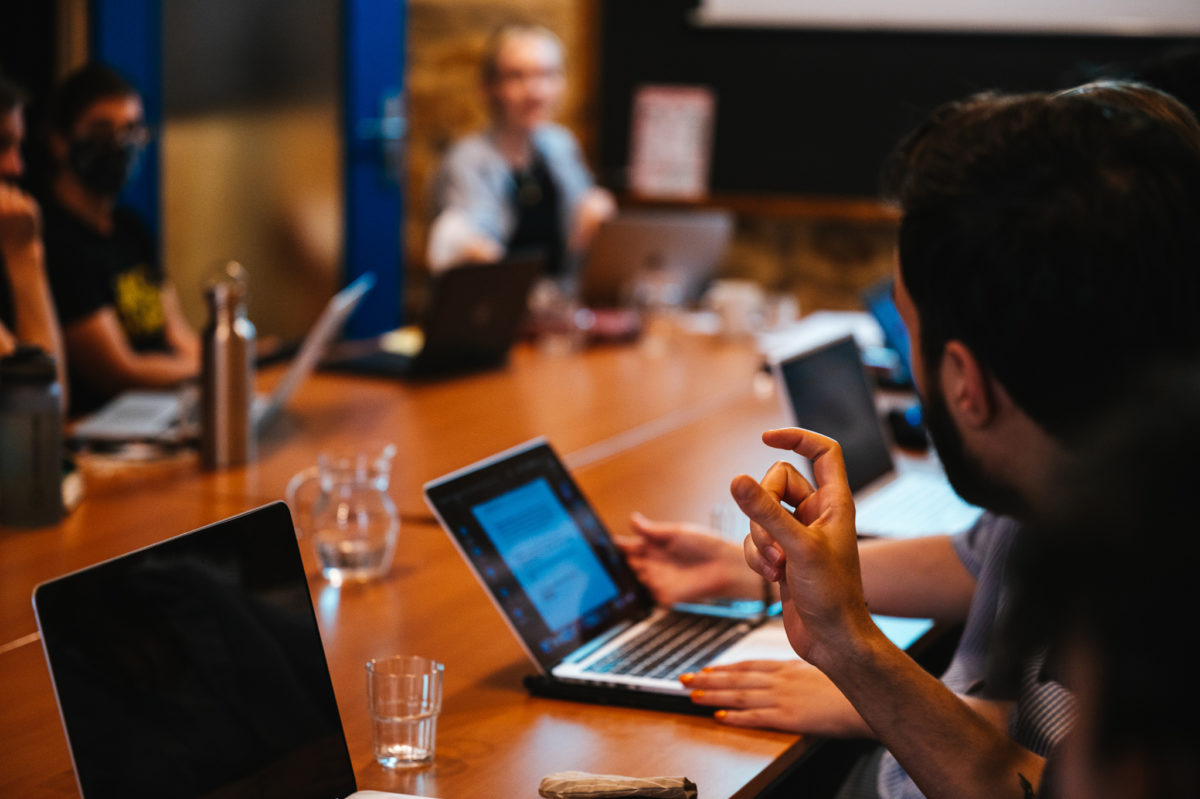 In her text Urgence Climatique, la Culture mise en Action, Chiara Badiali of the British organization Julie's Bicycle, encourages the jazz community to put the environmental and climatic question at the heart of its concerns, and to think in terms of big changes. This is the difficult but necessary task that Le Périscope, an innovative music venue located in the heart of Lyon, has set itself. Its objective is to experiment and "model" what a low-carbon jazz and improvised music sector could be, and to put this ecosystem in motion in the face of the climate emergency.

Until a few years ago, the notion of carbon footprint was almost foreign to the music industry’s vocabulary. On the contrary, some structures now wish to have their carbon footprint done in order to “compensate” and be able to communicate on their carbon neutrality. While this is certainly a positive sign that the players in the music and cultural sector in general are taking these issues into account, this craze raises questions about the understanding of this tool (because it is one) and the methodological choices made.

So, let’s go back to the basics. In very simple terms, a carbon footprint is a methodology for measuring the greenhouse gas emissions (GHG), in other words the impact on climate change, of a company, a product, an event, a community, a country, a festival, a venue, etc. In France, this methodology was published by ADEME in 2004. It takes into account all the greenhouse gases defined by the IPCC (Intergovernmental Panel on Climate Change) for all its flows. Its fields of application are divided into 3 categories of emissions called Scope 1, 2 and 3 (or “value chain” emissions):

A certain number of carbon assessments are simplified, i.e. they focus on the notion of responsibility for emissions, by evacuating all or part of Scope 3 emissions. However, the interest and relevance of identifying and taking into account all of these scopes is multiple. In a transition process, a global assessment of GHG emissions and the involvement of stakeholders upstream and downstream will make it possible to identify a greater number of reduction actions to be implemented. If the upstream and downstream, i.e. the flows on which the activity depends, are not taken into account, the result obtained may be very simplistic.

The question to ask in order to identify the flows to be integrated is the following: is my activity unchanged if I remove this or that flow? For a performance hall, will the activity be significantly impacted if I remove the “artist movement” or “audience movement” flow? If we still had doubts, it seems that the successive confinements that we have just experienced have clearly answered this question…

For this purpose, Le Périscope joined in 2020 the WeCount Climate Promotion alongside other structures and companies from Lyon from different sectors. The startup WeCount has indeed set up this training and collective support approach for any type of company wishing to measure and reduce its greenhouse gas emissions and accelerate its low carbon transition. The Périscope team was trained to perform its carbon assessment, to define a climate strategy compatible with the Paris Agreements and to set up a climate action plan with the help of the WeCount platform.

The method is quite classical, including training on carbon issues, definition of the scope, mapping of flows and a lot of data collection work that is then integrated into the platform. However, this Climate Promotion is unique in that it is based on a collective approach, with peer-to-peer workshops, the participation of many experts and pioneers, and the empowerment of participants in the management and implementation of this assessment.

For example, this was an opportunity for the team to point out certain difficulties linked to the specificities of the cultural sector and the types of activities that are specific to them, and which the carbon footprint model does not address. For example, Le Périscope does not only offer concerts, but also a wide range of activities such as rehearsals, residencies, cultural activities, workshops, European cooperation, support, etc. This led to many questions and exchanges when choosing the functional unit, which is the “quantified performance of a product system intended to be used as a reference unit in a life cycle assessment” (definition taken from the ISO 14040:2006 standard). In other words, it is the unit that by convention focuses on the main activities and allows to compare performances between them. Thus, for a country, its carbon footprint will be divided by its number of inhabitants, in order to compare countries. For a company, this unit could be the number of employees or its turnover. For Le Périscope, the number of concerts offered or the number of spectators are not relevant functional units since they do not reflect all activities. The choice was therefore made to use a unit representing the number of working days/number of artists hosted.

The choice was also made to integrate the artists’ tours, qualified as “upstream freight” on the platform. For each group and/or artist hosted at the Périscope, the team enters into a spreadsheet the mileage data corresponding to the transport between the origin and the destination as well as the transport between the gigs (200km by car on average). The total obtained is then divided by the number of shows on the tour. The argument against this choice could be the double counting one: if the artists or their producers/bookers count their own carbon emissions, why count them twice? What is important to understand here is that double or even triple counting is not a problem. A carbon footprint is not an accounting exercise, but a tool to understand your emissions and to see if actions can be taken to reduce them. In the same way, it can be interesting for a booker/band to calculate the impact of its tour by integrating the share of public travel, as is the case in the example below taken from the Green Touring guide. For instance, this can be an interesting tool and lever for a better cooperation between programmers and producers.

This is a trend that can be seen for concert halls, as the DEMO project’s analysis of the emissions of the participating venues (France and Belgium) also shows.

In comparison, for the 4 Écluses venue in Dunkerque, travel represents 75% of the total carbon footprint, and artists’ travel only covers 5% of the total travel item.
The DEMO study also highlights the strong impact of audience travel on the carbon footprint, a fact that has already been highlighted for many years by Julie’s Bicycle and is now becoming well known in the sector.

In comparison, for the Salle des 4 écluses in Dunkerque, travel represents 75% of the total carbon footprint, and artists’ travel only covers 5% of the total travel item.
The DEMO study also highlights the strong impact of visitor travel on the carbon footprint, a fact that has been highlighted for many years by the Julie’s Bicycle organisation, and is becoming well known in the sector.

The Périscope is located in the city centre, close to the train station, very close to public transport, and has an audience that uses soft mobility (cycling, walking, etc.). The venue does not have a car park, and parking is not free in the vicinity, with prohibitive rates. All these elements may explain this lower figure than the average for other venues. However, these data are mainly based on estimates, and must be refined, particularly with the help of an audience study.

It is also important to note that while the percentage of artist travel can be explained by the international programming, the relatively low figure for the share of audience travel makes the share of artist travel very important. The methodological choice of integrating these trips also makes it difficult to compare with other music venue that use a different calculation method.

The depreciation of the premises represents 15% of the carbon emissions, and this is a share that will remain unchanged over the course of the next assessments. No action can be considered on this part, since no one has control over it. Energy (electricity) accounts for just under 7%, and equipment (computers and office equipment) for 6% of total emissions. Next come food with 3%, and finally waste, waste treatment and packaging with just under 2%.

The diagram below shows the distribution of the Periscope’s emissions according to its value chain, with Scope 1 and 2 at the heart, and Scope 3 upstream and downstream.

All of this data was then used to define a trajectory and an action plan for the reduction of GHG emissions, corresponding to the Periscope’s activities by 2030, in accordance with the Paris agreements. The team already had some ideas in mind, but the carbon assessment exercise allowed to clarify these ideas, and to decide on the decisions to be taken. 3 possible scenarios: 1.5°C, Well Below 2°C and 2°C. The Périscope wanted to align itself with a 1.5°C trajectory, but once the analyses were produced, it was found that this choice was not realistic in view of the objectives that would have to be reached, and the Well Below 2°C trajectory was chosen. This means for the Périscope a 27% reduction of its total emissions by 2030, with the following breakdown, while keeping its core business and the richness of its activities and interventions:

In parallel to these short- and medium-term actions, the Périscope wishes to pursue the collective dynamic on the carbon issue instilled by the Climate Promotion and is taking its partners on board. First, work is being carried out within the European Footprints project with participating and selected artists, venues and producers/agents, by organising round tables and awareness-raising workshops, but also by working together on more sustainable tours, by extending their duration and reducing the distances between each date. This sharing of tours with other venues and/or festivals is one of the levers that is also put forward by the Shift Project in its interim report “Decarbonising Culture”.

The Périscope team has also set up an internal questionnaire to question the need for professional travel and to compare the different possible modes of transport.

The Périscope also addresses the carbon issue within the AJC network, a collective of 80 presenters (festivals, clubs, accredited stages, etc.) who are also involved in various collective projects. To this end, it has launched an experiment with 10 organisations (8 members of AJC and 2 partners of the Footprints project: Oslo Jazz Festival and Bimhuis in Amsterdam). Each of these venues will carry out its carbon footprint following the same methodology as that of the Periscope, i.e. taking into account Scope 1, 2 and 3 and the artists’ tours for the year 2019, which will allow a wider vision of the impact of the jazz sector and will provide orders of magnitude and a common roadmap. This ongoing study will give rise to a first public presentation at the Jazz(Ra) event in Clermont-Ferrand at the end of November.

The Périscope has therefore launched an experiment, it is projecting itself in time and involving its partners and stakeholders, while waiting to involve the whole sector. Looking at the music industry as a whole, this may seem like a drop in the ocean. A modest band playing 30-40 gigs in small to medium-sized venues has an annual carbon footprint of over 20 tonnes in Europe alone. As the Shift Project report highlights, a festival on the outskirts with 280,000 people over four days will emit around 13,800 TeqCo2. But by demonstrating the importance of the music industry moving onto a low-carbon trajectory, through its experimentation and beyond the prevention of the risks it faces, the jazz and improvised music sector can lead the way in promoting a more frugal and sustainable model.

Identifying, federating and defending the small clubs that stimulate the artistic scene in Europe.