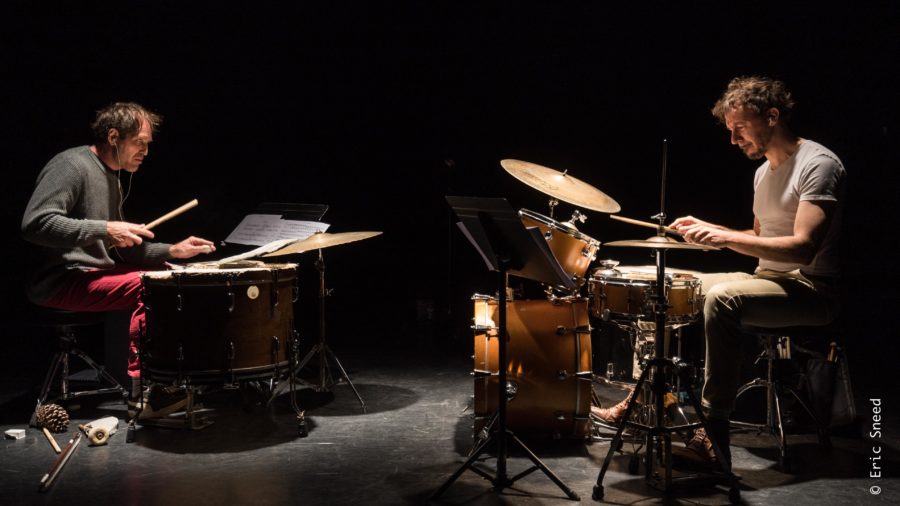 In a long-term study established as a sensory and exploratory journey through the most diverse fields of rhythmic life, the composer Karl Naegelen has undertaken a first stage of creation with an astonishing duo composed of Toma Gouband and Sylvain Darrifourcq. Both drummers and percussionists, they have the particularity to dig the furrow of very personal rhythmic paths. For the former, this path is strewn with stones, plants and more traditional drum elements that create a polyphonic world that is both complex and direct. For the latter, instrumental exploration is nourished by the aesthetics of machines and questions of temporality, space and rupture.

By bringing together these two singular, different and complementary musicians, the composer Karl Naegelen invents with them an object of writing and rhythmic explorations, resulting from slow shifts and phase shifts. Along the way, the composer and his two accomplices have discovered a landscape that was not on the map, a landscape that they had not foreseen, where falsely repetitive rhythms rub up against each other, and whose speeds, through their proximity, generate sound illusions that the musicians play with greed. In a face-to-face encounter, the two musicians, equipped with headphones through which the pulse arrives, develop a surprisingly disturbing and breathtaking game, situated on the edge of multiple musical aesthetics, in an open field listening to the rhythms of the world, free from codes and chapels.