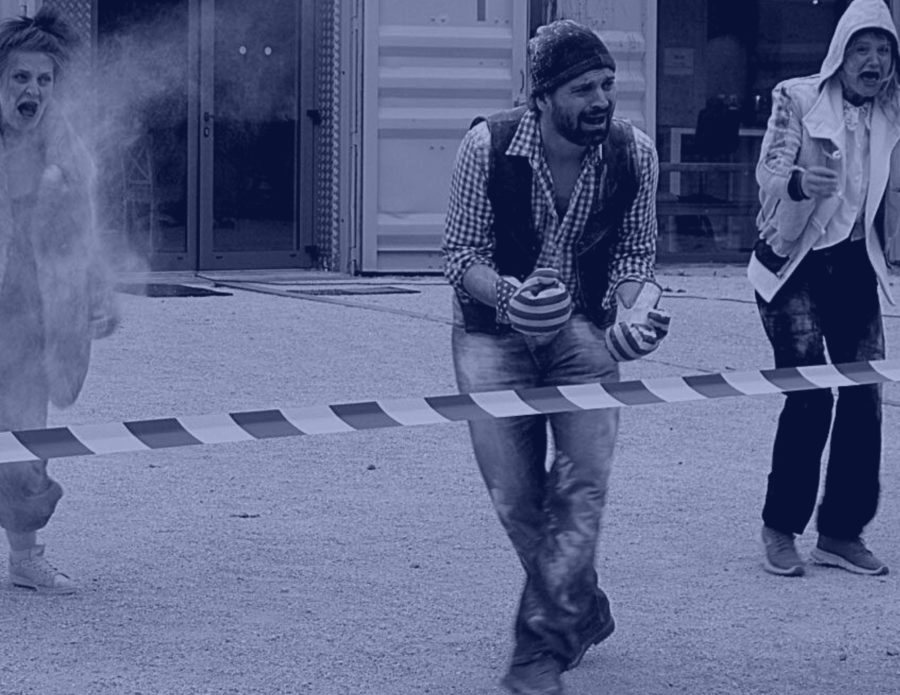 Meeting of two artists who have each created a show about the collapse. Sarah Daugas wrote and directed Apocalypse, a utopia for street theatre set in 2070. Jonathan Lobos wrote and directed Là Le Feu, a play that remains in a solastalgic present, in the form of an indoor musical theatre.

She first worked with the street art company Tout En Vrac in 2008, then joined the Scène sur Saône in Lyon in 2010. Driven by the desire to direct, she created the company Marzouk Machine in 2013, with the mission to save humanity by creating shows that are both popular and insolent.

Jonathan was a bookseller, before starting acting training at the Variety Theatre School (Jean-Philippe Daguerre), then the First Act School (Sarkis Tcheumlekdjian). There he directed two small forms (Matin Brun and La Mécanique du Coeur). In 2013, he launched the Théâtre du Bruit. He wrote and directed Je Suis, Nous Sommes, a diptych inspired by comic books, then Planète Plastique, a funny and poetic family show about the misdeeds of plastic and the 7th continent. Finally Là le feu, a musical theatrical collapse. From 2013 to 2018, he is part of the board of directors of Carré30 (Lyon 1) where he is in charge of communication and (collective) programming. He also sets up Les Passerelles de Mai, a festival of encounters between actor-students of Greater Lyon. Finally, he wrote La