Improvised music as a social outreach. 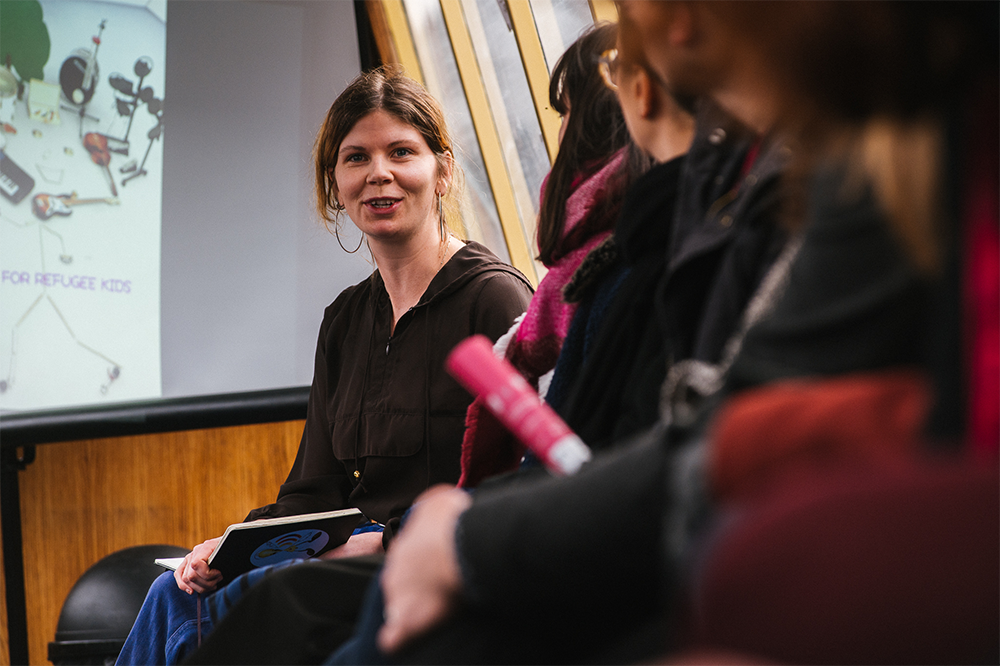 Multi-instrumentalist, singer and improviser living in Serbia, Mija Milovic testifies in this text to a project she has been defending for three years in the asylum seekers' centers of her country of birth, Denmark. Through authentic musical games, she tries to make all these women and men communicate despite such different languages and cultures. She gives several examples of creative exercises that have proved their worth, while worrying about the difficulty for such initiatives to exist through volunteer work only.

Improvisation in Asylum Centers is a musical workshop-based project initiated and run by Oliver Laumann and Mija Milovic and supported by JazzDanmark. We have since 2018 carried out workshops in most of the asylum- and deportation centres located in Denmark, of which there are only about ten left. We started off doing two-day workshops at five different locations. This model has since expanded into workshops of various lengths, like the weekly volunteer based music school at Avnstrup deportation centre – (the music school has since the COVID-19 lockdown been closed. We hope to be able to start up again in May 2020) – a music school that has more than associated 10 musicians/teachers. Initially we prioritised reaching more people, meaning doing workshops in more centres, now we focus on fewer centres and more intense workshopping with higher frequency.

During the last five years more than seventy asylum centres have been closed in Denmark; which has resulted in a reduction to eight to ten remaining centres; mainly deportation centres. They set the scene for an unwelcoming and hostile environment, that relies on outside help, primarily volunteer based, in order to do somewhat sustainable work. To name a few non-profit organisations: the group Together We Push has been acting as a weekly food supply, hosting party and further activity for the residents at deportation center Sjælsmark,  and Welcome Refugees: an organisation that offers free legal advice and counseling for refugees and asylum seekers.

The centres are all located in extremely remote areas, transportation to and from them is very sparse, so a goal has been to create a social-musical-therapeutic environment at the centres.  There has been very little opportunity to alleviate the hostile conditions at these centres, as residents have, for example, not been allowed to cook for themselves for the last two years, and the living conditions are, to say the least, depressing. We bring instruments supported by JazzDanmark that we can leave at the centers for the residents to play, but it is a struggle to convince the employees to make the instruments available when we are not around; therefore we try to bring friends and engage locals and new teachers in order for music to happen more frequently. The centres are like earthly limbos, a space with no free will, making its residents forever trapped in a ghostly state.

Since living in Serbia in 2017 working with refugees and carrying out the workshops at the asylum camps for the last 3 years in Denmark, we have assembled educational material based on alternative methods of musical notation, such as Animated Notation (example 1: Olivers “Spooky Spirals”) and Movement-based Scores (Diagram Picture Scores – see below, example 2: “The Stage” ; example 3, “Play a Field”), and example 4 “The Drummer” so called “Living” Scores, as well as playing music on spoken, written or drawn instructions in general (example 5“Chalkboard Improvisation”).

The idea of introducing a visual input, a visual “conductor”, that can guide players on WHEN to play, is a simple tool which can be made more complex and open up for collective composing and discussions on WHAT, WHEN and HOW to play. We needed a way of playing music where everybody could participate regardless of language, music skills, age or number of participants.

The goal is to establish different forms of musical environments in which we as a teaching group can shapeshift and change the musical content, and form it together with the residents depending on what they wish to work on, their age, or the number of people, etc. To name a few:  One on one solo instrument teaching, choir/vocal exercises, songwriting and technique courses on how the music room and its equipment are working. So far we have been focusing on collective improvisation as creating a musical safespace which has resulted in long timeless improvisations, small band formations with instrument rotation and the playing of the residents songs. We intend to run the music school for a long time and to do it in a sustainable way.

I will briefly touch upon the difficulty of volunteering: labour which is not paid for will by default not be prioritised and valued to the same extent as paid labour. The consequence is a feeling of a lack of responsibility and an interest-driven week-to-week decision making from people who work on a non-profit basis on whether to participate or not. Non-profit work is, for the individual, in competition with leisure activities and spare time, and that makes it hard to run a long-lasting non-profit organisation. The engagement is built on good intentions, but is also supposed to constitute a proper work force. Waiting for or depending on funding is absolutely not a solution either. It is important to reallocate whatever funding or finances available into areas where they normally do not circulate(the asylum centers), as well as making oneself available, as a teacher, as a friend, even though these are activities which are neither paid for, nor very often encouraged. So I urge people to break out of their narrow circle; to step beyond the perspective of economic reward and bring music, art, skills and friends to where they are needed.