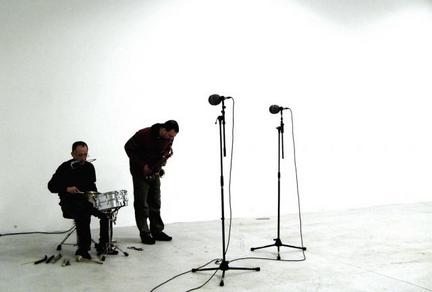 Echo of the places.

“The singular qualities and quantities of the place are for us the first condition of our music, the flickering that will make us play like this rather than like that. This necessarily implies a great diversity of results from one concert to another. In other words, between our mood of the moment (since it is said that we necessarily have one), the architecture and acoustics of the place, the type of attention of the audience and the characteristics of the background noise, the place and the moment pass through the filter of our propensity to play or not to play this or that.”

This duo started as a purely musical improvisation project.In 2006, it was integrated by Catherine Diverrès in a choreographic project (Blowin’), while continuing in parallel its original path. Structure, presence of the dancers, lights, objects, all the elements of this creation forced us to find completely different ways of playing music, despite the strong commitment of the project to improvisation that we are familiar with. This is where the idea of finding other fields of exploration for the duo came from.
Assuming the “non-concert” as a situation, in relation to space, time, silence, etc. Making a concert as a non-concert. In search of absence. (Excerpt from a Potlatch chronicle.)

This is the second essay of the duo Guionnet/Murayama, after the one published in 2007, “Le bruit du toit” (The noise of the roof). On the website of Jean-Luc Guionnet, we can read about the first form of the project that it consisted primarily of an in situ improvisation, the music being mainly determined by the environment in which it takes shape. Since Le bruit du toit was recorded in the studio, it was therefore a question of performing a concert as a non-concert. A la recherche de l’absence” (Murayama), hence a certain form of austerity and coldness according to my memory of this record. But for Window Dressing, the data changes because the two sessions that make up this disc were recorded live: the first in Ljubljana during a concert organized by Zavod Sploh, and intended for radio broadcast, the second, captured on boom by Eric La Casa in a Parisian library.

During these four pieces, spontaneity seems to govern most of the structures and modes of play. As noted by Jean-Luc Guionnet as early as 2007, both seem to react as much to the spatial and acoustic properties of the place in which they play, to the listening and attention of the audience, as to the instrumental techniques and sound characteristics adopted by each. The tension resulting from concentration and attention to all these parameters is palpable from beginning to end, within the music on the one hand, but also within the listener himself, for whom a certain form of singular attention is required.

A dialogue between presence and absence that forms the depth and multiple contrasts of these improvisations. Contrasts of intensity that range from the long and heavy silence to the screaming and shrill notes of the viola, through snare drums that are gently and sporadically percussive.